The First National College Forex Trading Demo Contest was officially launched on June 17, 2013 and the awards ceremony will be held in Beijing on Nov 2.

FSI's call for popular participation, via new and traditional media allows young college students to take on internships in the multinational business and promotes cultural exchange.

It is difficult to assess the international financial markets and optimize asset allocation, diversify investment risks, improve capital gains, and know how to enhance the value and functions of forex reserves.

The expansion of forex reserve investment channels has become an important matter, and FSI strive to provide the best trading experience, customer service and financial security - consistent with the customer's position and interests".

As FSI founder and president, Mr Edward Chung said "Throughout the history of development of Wall Street stock brokerage, standing on the buyer's side has always represented the general industry trend ".

The contest registration time is from June 17 to Sept 22, and the participants will be from major colleges and universities, as well as financial and economic institutions.

Trading time is from September 23 to Oct 26. All prizes will be provided by FSI and sponsors, and are as follows: Outstanding Prize, First, Second and Third prizes. Additionally the FSI US headquarters hedge fund will grant a certificate of commendation.

The Awards Committee will be comprised of eight of the FSI hedge fund traders from the Beijing office, and the office chief analyst will be the chairman of the committee. After 2 rounds of review, a nomination shortlist will be configured, and the decision made by the panel.

The financial sector development and reformation of the 12th Five-Year Plan clearly places emphasis upon the continuing development of monetary, foreign exchange and gold markets. 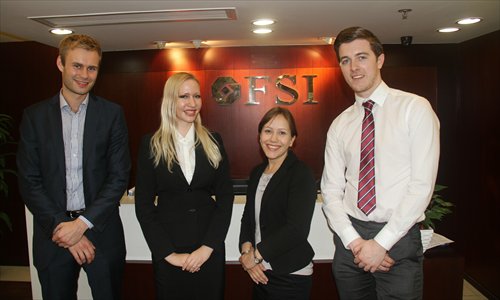 As the unemployment epidemic still spreads around the globe, leaving millions of young people out of work, more and more recent graduates are finding jobs through "backdoor" internships in China.

Elizabeth Thomas, 24, a recent graduate of Knox College in the US, who had no previous law experience, is waiting for a work visa so that she can start working as a paralegal after three months interning at a Chinese law firm. She decided to stay in China for another year to build connections instead of going to law school in the States.

"Having experience here has given me an insight that most people can't really see: working in a Chinese law firm with Chinese lawyers, studying law itself and comparing it with American law," Thomas told the Global Times. "That is going to put me so much higher than other students applying for law schools."

With the unemployment rate at 7.6 percent in the US, many recent graduates look to China. There are no official figures for the number of foreign interns in China as the majority of them come to China on tourist, student or business visa. However, several third-party internship organizers told the Global Times that their business is booming and the number of applications is growing.

Fred Dai, managing director of InternsLink Recruiting, which placed Thomas with the Beijing-based law firm Globe-Law, told the Global Times that both companies and interns are in need of each other.

"For foreign interns, it is a great opportunity to get to know China and how business works here, and for many Chinese companies foreign interns are quite useful to help them develop internationally," Dai said.

After living in Beijing and studying Putonghua for the last year and a half, Thomas decided to apply to law schools in the US for the coming fall. However, with a background in journalism, not a single one showed interest in her. She decided to pay a third-party internship organization to secure her an unpaid internship. A week later, she was placed with a Chinese law firm.

The days of stereotypes where interns just made coffee and photocopies might have gone as many get more responsibilities. At the law firm, Thomas is responsible for translations, writing up case reports and making presentations on differences between Chinese and American law for students.

She said her experience was worth it as such opportunities are rare in the US.

"Most of the people in the US that studied intellectual property law are coming to China now because this is where everything happens," she said. "For me to have this opportunity to work in a Chinese law firm before I even study law in the States is incredible."

After three months interning at the law firm, the company decided to help her get a work visa, which rarely happens for unpaid interns.

"China is an economical choice. China is a fun place," Zach Adams, managing director of Get in2 China Group Ltd., told the Global Times.

The company receives 4,500 internship applications each year and placed about 1,000 interns in Beijing and Shanghai in 2012. About 39 percent of them came from the UK, followed by 18 percent from the US and 12 percent from Canada.

Get in2 China offers both paid and unpaid internships. The amount of compensation varies from company to company. Most host companies offer small money that can cover day-to-day transportation expenses and possibly a meal.

"We believe, as do prominent economists, that over the course of the next 15 years global economic power will shift from the US and Europe to Asia, with China leading the way," says an advertisement on Get in2 China's website.

However, finding an internship in China is not less competitive as many companies are becoming pickier. Only 30 percent of the interns can make it to interview, said Adams.

"Back in 2009 they would take just about anyone because interns basically worked on reception and did things that everybody can do, " he said. "Now they want multilingual interns, they want interns with advanced degrees in engineering, finance, or international marketing."

Some of the applicants are recent graduates from top universities like Oxford, Cambridge and Stanford, which makes finding an internship even more competitive.

Adams gave the example of one Chinese student who went to study abroad and thought she would be near the top of the list of applicants, but found herself in the middle of the pack.

"We have 20 to 30 percent of interns who speak three or four languages. It is a reality that sometimes interns are over-qualified when finding jobs," he said.

A recent report conducted by McKinsey found out that every five minutes, a 2012 graduate takes a job for which they are overqualified, the Huffington Post reported.

The report also found about half of the recent graduates said they are working jobs that are not related to their degree.

Stephen Mills, a recent British graduate, was placed at The Institute of Chartered Accountants in England and Wales for one month.

"I don't really want to spend that much time doing an unpaid internship," Mills told the Global Times. "But it is difficult to find internships in London and you can't get a job without work experience."

But not every foreign intern feels comfortable interning and living in China. Dai once had to convince a French student it was safe to go to hospital in China.

"He was told by his parents not to go to hospital in China in case he became infected with some disease," Dai said. "Many foreigners have read negative news about China. I told them interning here is a chance to get to know the real China."

For many foreign interns, Chinese office culture presents another challenge. The first day when American 24-year-old Matthew Bleiman started an internship at The Energy Foundation here in Beijing, he wore a suit and tie, making him look out of place.

"The dress code in the US is more formal, you don't want to go in and look like you don't care," Bleiman told the Global Times.

During the first two weeks of the internship, Bleiman said he was not given too much work to do. He asked his boss who seemed too busy to get back to him.

"I guess they didn't really know what to do with me," Bleiman said.

Now Bleiman is helping the Foundation in setting up a guidebook for local cities to start thinking about how to establish an air quality plan. He hopes his internship experience will lead to a job in China.

Wang Zhengzhi, senior partner at Globe-Law, told the Global Times that they have learned how to deal with foreign interns since the firm started recruiting them in 2006.

He was once told by two foreign interns that their agency had arranged some other activities for them and that they would not be in the office for a few days. He later discovered they lied and went travelling. Since then, the firm has started interviewing interns recommended by the agencies.

In another case, he was very upset with an Australian intern who was often late at work. But he did not tell her till the end of the internship. She told him they should have given her a warning letter earlier, a tactic that he had not known before. Since then, the company has started using warning letters.

For many Chinese companies who want to go global, foreign interns are seen as an asset.

"They are young and creative," said Wang. "They bring new ideas, new ways of thinking and can be a breath of fresh air for the office."

Now the law firm is about to open its office in New York, cooperating with former interns who are now working in the US.

"We never thought we would have the chance to interact with them again, they are welcome to join our firm overseas," Wang added.

Ivy Liu, chief representative of Forex Signs in Beijing that has about 15 interns, told the Global Times that foreign interns are more confident and passionate than Chinese interns.

"I think they come from varied backgrounds so they have more passion and curiosity for a new culture, they are just so much eager to learn new things," she said.

However, many State-owned companies show less interest in taking on foreign interns. Some require a detailed background check or a security check that takes about six months.

The fact that these giant corporations are not as quick to adapt to what foreign interns can offer as private firms is not surprising. However, the simple reality is that the benefits that interns keep bringing to Chinese companies, coupled with the obvious advantages it brings to them, means that more interns are likely to see China as their gold rush.